The Secret is Out. Spread the Word. 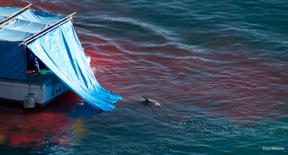 Japan is a lovely place, inhabited by people who have an intense appreciation for nature. But what the majority of them don’t know is something that a group of fisherman will stop at nothing to keep a secret. In a remote cove, more than 20,000 dolphins and porpoises are driven annually to a horrible fate. They are herded into a small and hidden cove that are barricaded by nets. In order to get the dolphins into the cove, the fisherman bang on steel pipes that are submerged in the sea. These loud sounds reverberate throughout the area, disrupting the dolphins’ sonar, which confuses and terrifies the dolphins.

The most attractive dolphins are sentenced to life in captivity, and sold alive to aquariums and marine parks. The others are brutally killed for their meat, which contains toxic levels of mercury, and is sold as food.

Find out the truth about the ongoing dolphin hunts. Watch the movie The Cove. Please help us get the word out and end this brutal and unnecessary slaughter. These helpless dolphins are being forced to fight for their lives and their freedom, and we are their only hope.

“Right now, I’m focusing on that one little body of water, where that slaughter takes place. If we can’t stop that, if we can’t fix that, forget about the bigger issues. There’s no hope.”~Richard O’Barry

Killer whales are also affected by ongoing hunts in Taiji: